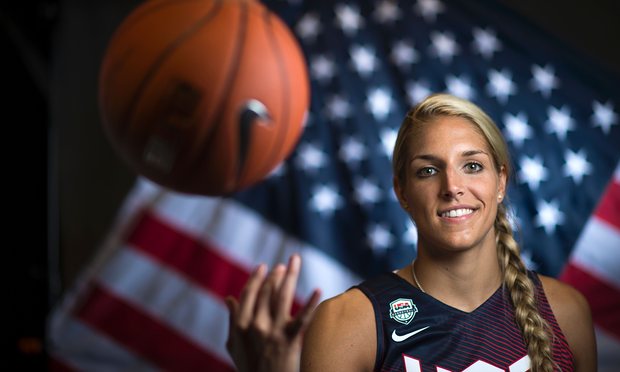 Elena Delle Donne – the current WNBA MVP and one of the world’s biggest basketball stars – has come out publicly this week.

The Chicago Sky player, who is leading the US women’s quest for gold in Rio, told Vogue magazine that she is engaged to her longtime partner Amanda Clifton, and confirmed the news to reporters in Brazil.

Elena divides her time between traveling with her team, the Chicago Sky, and her family’s home in the rolling green landscape of Wilmington, Delaware. She and her fiancee, Amanda Clifton, keep apartments in both Chicago and Wilmington.”

That’s it. Simple and sweet. Delle Donne, 26, has voiced support for lesbian players in basketball such as Brittney Griner, but this is her first public declaration.

Delle Donne acknowledged the article in during a talk with reporters on Wednesday.

It was just one of those articles where they came into my home, spent a couple days with me, and [fiancee] Amanda [Clifton] is a huge part of my life,” Delle Donne said. “So to leave her out wouldn’t have made any sense. It’s not a coming out article or anything. I’ve been with her for a very long time now, and people who are close to me know that, and that’s that.”

This place was so cool! So glad we got the chance to experience the @SavedByTheMax #SavedByTheMax

The article said Delle Donne and Clifton were engaged on 2 June.

As the future keeps moving on, I don’t plan on having our relationship out in the public and all this media on it,but obviously there’s excitement right now because people see it for the first time.

I decided I’m not at all going to hide anything.”

In the WNBA world, Delle Donne is a star. She is the second pick in the 2013 WNBA draft behind Griner and last season’s league MVP yet I imagine most people will yawn at the news.

Out female athletes have never gotten the same amount of attention as a man, for various sociological reasons.

Regardless, it’s awesome that Delle Donne went public about her relationship and she will be an inspiration to other athletes considering whether it’s possible to be in a same-sex relationship and a high-profile player.