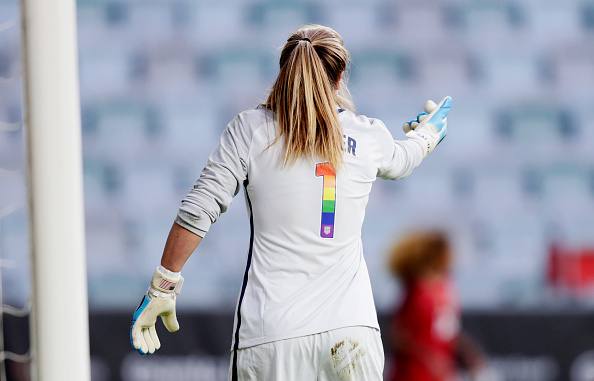 The US women’s national soccer team recently announced that in recognition of Pride Month, a special kit with rainbows would be worn in away friendlies against Sweden on June 8, and Norway three days later.

Following the decision, Jaelene Hinkle dropped out of the friendlies for “personal reasons”.

She has not publicly commented to confirm the reason for dropping out, with an official statement, but the 24-year-old defender has been an outspoken opponent of LGBT equality.

When the Supreme Court legalized same-sex marriage in 2015, Hinkle posted a message on Instagram criticizing the decision and the LGBT community’s use of the rainbow as a symbol. She also posted the marriage equality logo reworked into a cross.

“I believe with every fiber in my body that what was written 2,000 years ago in the Bible is undoubtedly true. It’s not a fictional book. It’s not a pick and choose what you want to believe. You either believe it, or you don’t. This world may change, but Christ and His Word NEVER will. My heart is that as Christians we don’t begin to throw a tantrum over what has been brought into law today, but we become that much more loving. That through our love, the lost, rejected, and abandoned find Christ.”

If she has a problem with the LGBT community, Hinkle may have a problem with her head coach, Jill Ellis, who is openly gay and lives with her wife, Betsy Stephenson, and their daughter Lily.

U.S. Soccer teamed up with the You Can Play Project on the Pride jerseys.

The men’s team wore them last week in a match-up against Venezuela, though one of the players skipped the game, regardless of their personal religious convictions.