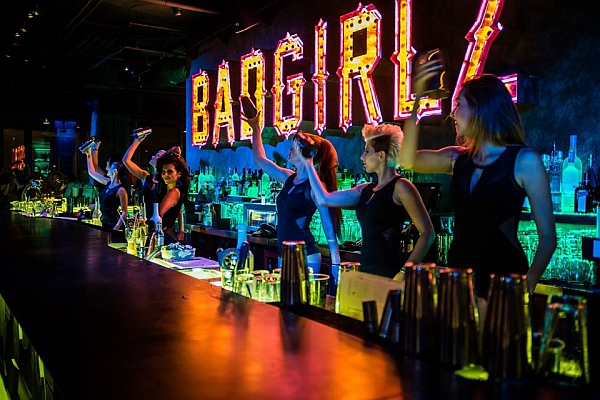 Has anyone else noticed recently how our lesbian hangouts seem to be getting less and less? I remember my last trip to London about 4 years ago and of course where is the first place I head for?

The Candy Bar no less. It was one of the most popular Lesbian bars around in London but 3 years ago it shut its doors, despite the amount of women that used to hang out there.

It seems that this is something happening all over and especially in the United States. There are still many Gay bars that have ‘Ladies Nights’ but why are Gay bars thriving and popping up everywhere but our friendly ladies’ haunts are disappearing at a rate of knots? Apparently there are now only 3 lez bars in NYC and one woman, Oliva, also from NYC told Cosmopolitan:

I think it’s hard for femme-presenting women to find an LGBT space where they feel legitimate — I often feel like people don’t believe that I’m queer and I also feel like most LGBT spaces are dominated by gay men.”

It’s really looking like our own LGBTQ community are still seeing woman as less important than men. Another woman, Becky, also told Cosmo:

There has often been a misogynistic attitude that I’ve felt from male-dominated queer spaces. “Often, LGBTQ women aren’t taken as seriously as LGBTQ men because it’s believed women are more fluid in sexuality and thus not reliably LGBTQ. I think this stems from institutionalized misogyny and the constant sexualisation of women.”

Umph, now this is not good. Women get the rough end of the deal all the time and it’s hard enough fighting for our rights in a predominately hetro society, not alone having to fight for our rights in our own community.

Last year a documentary titled ‘The Last Lesbian Bars’ highlighted this issue and Jack Halberstam, a professor of gender studies at the University of California stated that:

Even back in the ’50s and ’60s, which some people consider to be a golden age of lesbian bars, it was often community formation as much as it was hooking up.”

That’s so true. Lez bars are a place we can also go and feel comfortable, safe, and, as an extra benefit, meet like-minded women that we might just want to share a tequila with at the end of the eening.  Earlier this year a dating app for queer women, HER, carried out a poll with 3000 women and asked them how they specifically felt at events during Pride month in June. The survey found that many women felt unwelcome despite the fact Pride is supposed to cater for the entire LGBTQ community. When women were asked to explain why this was many responded with:

I feel things are more catered for Gay men.”

I for one am not happy with the fact we are losing our own lez bars that are men free zones. Not because we don’t like men, but because it’s only fair we also have our own space to hang out with and are able to celebrate who we are freely only with other women. I guess we just have to hope that the Lez bars make a come-back because us ladies deserve a place of our own.