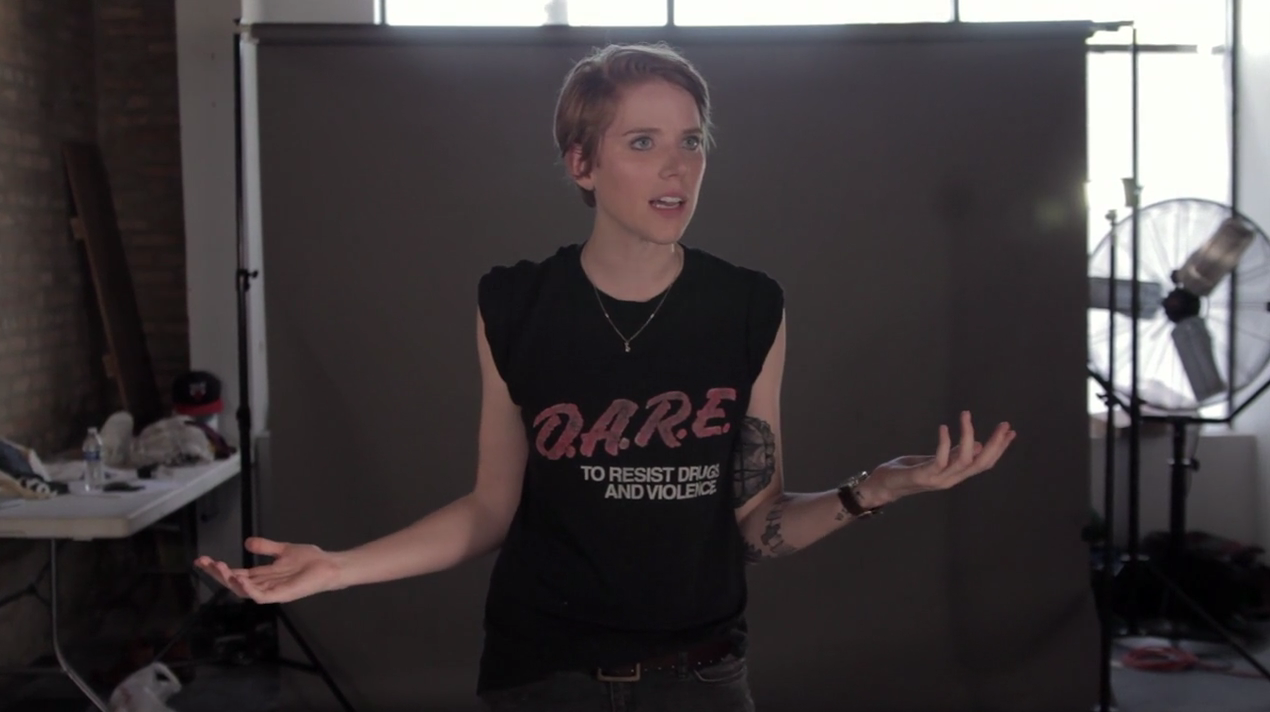 First of all she’s straight, and I’m not doing that again”

This line, said by Alex in episode three of Plus One, is certainly a familiar statement.

As queer folk, we know that straight women are a no-go zone. We tell each other that they’ll break our hearts, that they’ll leave us lonely and we should avoid them at all costs. We should doubly avoid them if they’re dating our male best friends too.

Sadly for Alex, being the lead character in a web series means that some drama is always set to go down and in Plus One, drama’s name is Holly.

She’s beautiful, funny, talks about being ‘fluid’ and she’s looking at Alex like she wants to shack up with her, adopt five cats (named after the core L Word cast, natch), and get matching plaid shirts with ‘Hers’ and ‘Hers’ embroidered on the lapel.

The problem is, Holly is dating Ben and Ben’s head over heels for her. So what’s a lovestruck lesbian to do?

The answer, you’ll see, is to go for it anyway. The morals are murky but the hearts-in-eyes are apparent and so just like Kate, Alex’s sidekick and bestie, you’ll be encouraging her to go for it, giving in to what her heart wants even if it’ll lead to hurt feelings, frosty silences and repeated ‘what the f—ks!’ in raised voices.

From that description, you’ll understand that Plus One is a little tropey and its story is familiar to anyone who has watched any popular media featuring gay people in the past decade (e.g The L Word season one) but that’s not a bad thing.

Plus One is a real shippers’ delight; as Holly and Alex fall for each other, you fall for their relationship too, despite its position in the grey area.

There will be cheers and whoops and maybe even a few happy tears watching these two get together and it’s also why Plus One’s five episodes (which are about 10 minutes apiece) are perfect binge watch material.

And even when Plus One isn’t kicking your heart to Mars and validating all of your straight crushes (because yes we’ve all had them), it’s laugh out loud funny too.

Call me cold, or missing a funny bone, but there aren’t a lot of shows that can make me laugh, but this one did that several times, even when I re-watched and knew that the jokes were coming.

Dannielle Owens-Reid and Mo Welch’s writing is truly on point and Barb (Kate’s girlfriend – although Kate is reluctant to admit it) is one of the single funniest characters I’ve ever witnessed on screen.

Plus One comes highly recommended then, though I do have a few criticisms. For example, the audio in some of the kitchen scenes (along with the aforementioned “first of all she’s straight” scene) is a little off and in a very small amount of scenes, the camera is also a little shaky.

Also, I definitely would have liked more episodes of Holly and Alex’s will they/won’t they dynamic, since half of the fun is watching your favourite characters free fall in like with each other, but hopefully Plus One will get a season two that delivers more sappy moments between them.

Plus One can be seen exclusively on One More Lesbian/Tello. Subscriptions are only $4.99 a month, which isn’t a lot to support queer made and produced content.