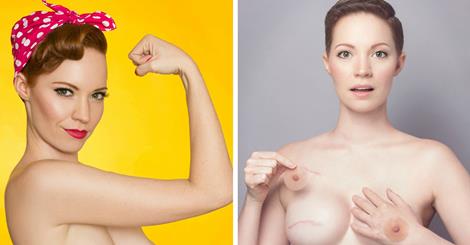 Aniela McGuinness, a 32-year-old actress, decided to deal with her breast cancer with a photoshoot – titled “My Breast Choice”.

She learned she had cancer just three days before a planned appointment to schedule a preventative mastectomy; McGuinness had lost her mother to ovarian cancer on July 5th, 2013.

Before removing my breasts I wanted photographic evidence of what they looked like, but I didn’t want mug shots of attempted murders. I wanted a photo that captured how I felt. So I decided to do a photo series that would express the emotion in each stage of the process.

I wanted to change the images that women saw of mastectomies. No more Before and After photos. I wanted them to see the Evolution, the Life, and the HUMOR in this dark situation.”

… the impact Breast Cancer, a double mastectomy, and chemo can have on a woman’s body & soul and uses humor & honesty to go beyond just surviving. Mainly, I needed something to focus on while I went through this, a place to release my creativity and feel useful. My Breast Choice gave me that.”