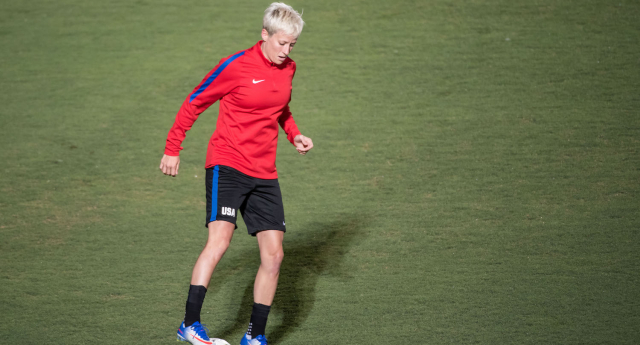 Earlier this week US women’s soccer players said they were told by Brazilians on the side-lines that crowds had chanted the homophobic slur usually reserved for men’s football games in the country, reports the LA Times.

The chant surfaced during the Australia-Canada match as well, in which at least four players identify publicly as LGBT.

Speaking to the LA Times, US midfielder Megan Rapinoe called the chant “personally hurtful”, after being told by a stretcher crew what the Portuguese word “bicha” meant.

She went on to say that a “mob mentality takes over”.

Rapinoe is out as a lesbian like US coach Jill Ellis, and said that she didn’t “think they mean it in that way”, but she added that they “need to understand how it’s taken”.

What does that say to players who are struggling to come out?”

FIFA has struggled to curb the use of words like “bicha” and “puto”, a similar phrase used by other Latin American fans.

The use of “bicha” by fans in men’s matches isn’t new. However, it’s a bit odd for the slur to surface in women’s matches, as it’s a term aimed at men.

A video was released by FIFA in June showing national team players begging fans to stop using the term.

Rapinoe said she wasn’t sure whether sanctions on fans using the chants would be effective, but that a conversation needs to be opened up on “racism, to homophobia, to sexism”.

I don’t think that all Brazilians fans or everyone that was there last night is homophobic. But I think that they are complicit in it as long as they’re doing it. FIFA can crack down as much as they want but it’s up to individuals in the stands to not participate in that kind of behavior.”