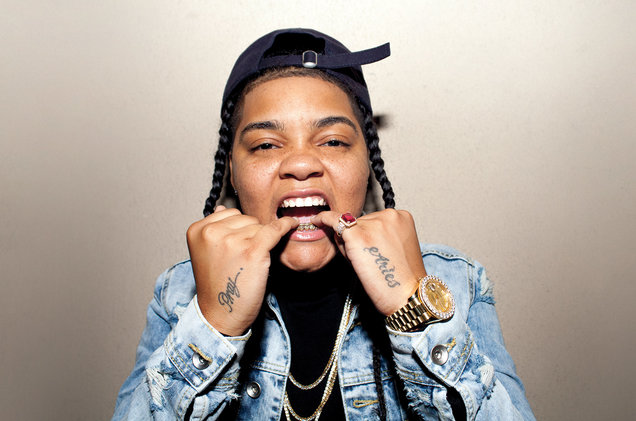 Brooklyn rapper Young M.A burst onto the music scene last summer with her catchy track, “Ooouuu,” a song that scored remixes from everyone from Nicki Minaj to Remy Ma.

However, beyond her music, Young M.A was also making waves in the industry by succeeding as an openly lesbian rapper in the male-dominated world of hip hop.

In an interview with The Fader, Young M.A revealed that growing up in New York helped her come to terms with her sexuality.

Life is too short. I need to just be myself, express myself.

In New York City, it’s popular. I used to think to myself, Man, there’s a lot of gay people out here. And it had me comfortable, it was like, I can be myself! I used to still try to hide it, until it was really overwhelming — there were just too much girls attracted to me!”

She also shared that she hopes that while she’s comfortable being open about her sexuality, she doesn’t want it to pigeonhole her as an artist, preferring instead that people focus on her music and how it makes them feel.

I hear from all different people, not just people like me, or lesbians. It be straight people, it be grown men, it be grown women, people that have been sick or depressed that say, ‘Oh, you made me want to go do what I want to do for myself and chase my dreams.’ That’s my purpose.

… If I change people’s lives, that’s all that matters to me,” she says. “I don’t want to be the first ‘dyke rapper,’ ‘aggressive rapper,’ you know what I mean? I don’t care for that.”