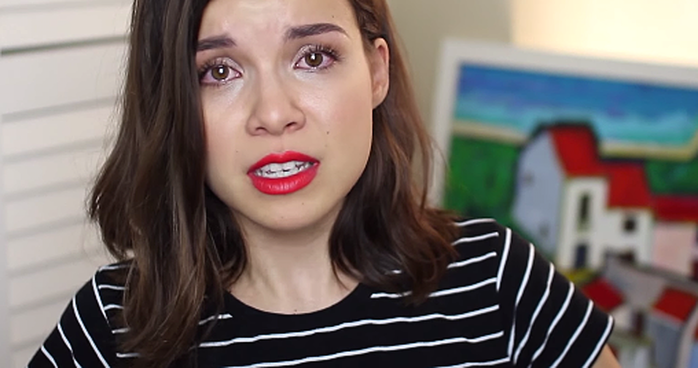 You might know YouTuber Ingrid Nilsen from her stint as a judge on Project Runway: Threads, or maybe you’re one of her more than three million YouTube followers who have been watching her videos for the past six years.

And if you are, you know her to be one of the most honest video stars out there, someone who really connects with her fans.

Yesterday, Nilsen had an important message for her 3.3 million followers, announcing in an emotional 20-minute video that she is gay.

The video, which garnered more than 1 million hits in just eight hours, featured an alternately tearful and pensive Nilsen explaining how she decided to come clean about something very personal.

Looking *so* relieved to say the actual words, “I’m gay”, Ingrid gets right down to business when the video starts.

Just try not to cry with her as she spills her heart out on camera – it’s so, so touching.

She goes on to explain how she grew up in an environment where being gay was “not universally accepted” and that she was dating men just to “go through the motion.”

Her last boyfriend, the “last guy she’ll ever date,” was “kind, respectful, and supportive,” but she couldn’t keep lying to herself.

I want to live my life unapologetically because I am proud of who I am and I am not going to apologize for who I am anymore. This is the life that I have always lived in my head and now it’s real.”