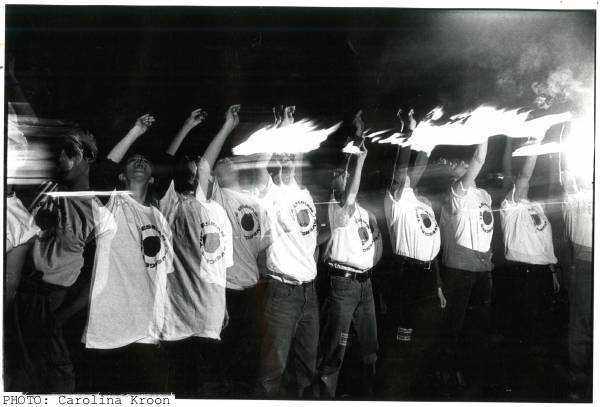 One of the most prominent issues that lesbian and bisexual women activists have had to face across history, has been the avoidance to include the specificity of the issues they face due  to intersecting oppressions, and the focus that has been given mostly to the demands of gay men.

One of the strongest movie scenes I can remember troubling me, ισ one from the 2014 Pride movie which I generally loved: Stella and Zoe, two of the three lesbians of the Lesbians and Gays Support the Miners group, are sitting on a table in the Miners club with Mark and Mike, demanding the creation of a Women’s group that will address specifically women’s issues in a safe environment. Mike asks Stella what is unsafe about the existing environment and Stella replies “I’m a woman, Mike. Okay? I’m also a Lesbian. And a Feminist – ”… But then she is cut in the middle of her sentence by an old lady who leans over and says: “Listen, love. I don’t care if you’re Arthur Scargill. Don’t talk during the Bingo.” Everyone laughs while Stella “silently fumes”.

Coming from an otherwise excellent movie, this scene angered me. Not necessarily because it was poorly written, no. But because women demanding space was the punch line once again, because it was somehow realistic, you know? Being in the activist field myself, I have witnessed incidents of misogyny coming from within the LGBT community, even in 2016. That’s why I think we need more feminism in queer politics, and we need it immediately and constantly.

It was 25 years ago, on the 28th of June, 1992, more specifically, when sex lesbian activists (Ana Maria Simo, Sarah Schulman, Maxine Wolfe, Anne-Christine D’Adesky, Marie Honan and Anne Maguire)  involved in several LGBT groups (including Medusa’s Revenge – the ACT-UP  Lesbian Theatre and ILGO – the Irish Lesbian and Gay Organization) started recruiting people at New York’s Pride Parade, shouting at “LESBIANS! DYKES! GAY WOMEN!” that they were “…wasting our lives being careful. Imagine what your life could be. Aren’t you ready to make it happen?”

We’re not going to be invisible anymore … We are going to be prominent and have power and be part of all decision making.”

Gay and bisexual women were tired of solely working on issues like AIDS and abortion rights while at the same time having the problems caused by misogyny and homophobia and concerning directly them, outright ignored, as Eloise Salholz wrote for Newskweek, covering the 1993 March on Washington for Lesbian, Gay and Bi Equal Rights and Liberation.

They demanded visibility and focused on issues of “lesbian survival”. They soon became a worldwide phenomenon, launching chapters in more than sixty different regions, and soon including issues concerning the intersections of gender, race and class. Already by 1994, 20.000 dykes marched on Washington and more dyke marches started all over the world.

Most of their actions were shocking for the social and time context, intriguing, challenging: the Lesbian Avengers didn’t do calm and careful and waiting: they avoided traditional ways of advocacy such as sit-ins and petitions.

Their first action on the 9th of September, 1992, was against right-wing attempts to suppress a multicultural “Children of the Rainbow” curriculum for schools. Thus, the Avengers attempted not only to shock, but also to break down homophobic and racist stereotypes and to raise visibility for their lives, rights and voices.

They met in Queens School District 24, the one that had the strongest conservative voice, and paraded through the neighborhood to a local elementary school, handing out lavender balloons to children and parents saying “Ask About Lesbian Lives”, wearing t-shirts that read “I was a lesbian child”.

Fire-eating also became a signature for them: The New York Times explains:

It grew out of tragedy. Last year, a lesbian and a gay man, Hattie Mae Cohens and Brian Mock, burned to death in Salem, Ore., after a Molotov cocktail was tossed into the apartment they shared. A month later, on Halloween, at a memorial to the victims in New York City, the Avengers (then newly organized) gave their response to the deaths. They ate fire, chanting, as they still do: “The fire will not consume us. We take it and make it our own.””

The Avengers then marched down 5th Avenue carrying torches and burnt signs reading names of homophobic propositions that most probably led to violence. At the Washington Dyke March that took place in 1993, they ate fire in front of the White House.

This was thought to be the first Dyke March. After that, many followed, usually held a couple of days before the Pride Parade. The second New York City International Dyke March coincided with the anniversary of Stonewall Riots, Gay Games IV and international human rights conferences. Today marches are held even in Mexico City.

The British chapter of the Avengers was formed in 1994 by members of OutRage!.

Kelly Cogswell, a member and author of Eating Fire: My Life As A Lesbian Avenger, told The Huffington Post:

The Lesbian Avengers 25 exhibit proves that it’s possible to fight back. We have to. We’ve done it before, and we’ll do it again. It’s not magic. But sustained activism does make a difference.”