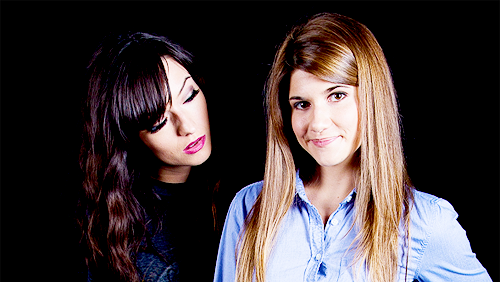 One thing we were all grateful for last year was the YouTube hit Carmilla, the vampire web series that not only had a strong story, but a whole lot of queerness too.

Usually queer vampires don’t get happy endings. They get staked into goo or ashed or abandoned for someone more alive and straight, but this show is different.

Carmilla (inspired by the infamous novella by J. Sheridan Le Fanu) is all about a girl called Laura (Elise Bauman), whose college roommate disappears into thin air. Following a round of other weird disappearances of other girls on campus, she puts together a series of vlogs to document her journey as she attempts to get to the bottom of it.

Well with one roomie vanishing into nothing, leaving just a trail of unidentified goop in her wake, Laura gets a new one in the form of the titular Carmilla (Natasha Negovanlis).

Carmilla likes late nights, setting things on fire and flirting unashamedly with Laura. Oh, and she also happens to be a vampire too! The main ship on the show, Carmilla causes trouble for Laura but is also a surprising ally in the race to save the missing roommate and discover what happened to the other girls who’ve been taken.

But, Laura/Carmilla shippers have another roadblock to face (as if the whole, undead vampire thing wasn’t enough) in the form of Danny (Sharon Belle). Danny is a new friend of Laura’s who also appears to have a little crush on her too. It’s sweet! Both Laura-centric ships are adorable and it’s clear there’s something there even if the show doesn’t seem to be interested in sticking labels all up on them.

As if that wasn’t enough, add the adorable mother hens of the show LaFontaine (Kaitlyn Alexander), and ‘Type A’ dorm monitor Perry (Annie Briggs).

So in short, Carmilla has a fantastic premise, a mostly female cast of characters to fall in love with and some queer lovelines to follow too.

That’s probably everything we’ve been looking for in a show and episodes are about 4 minutes long on average. So what are you waiting for?

Seriously, trust us on this one. New episodes of Carmilla will air on Tuedays and Thursdays.