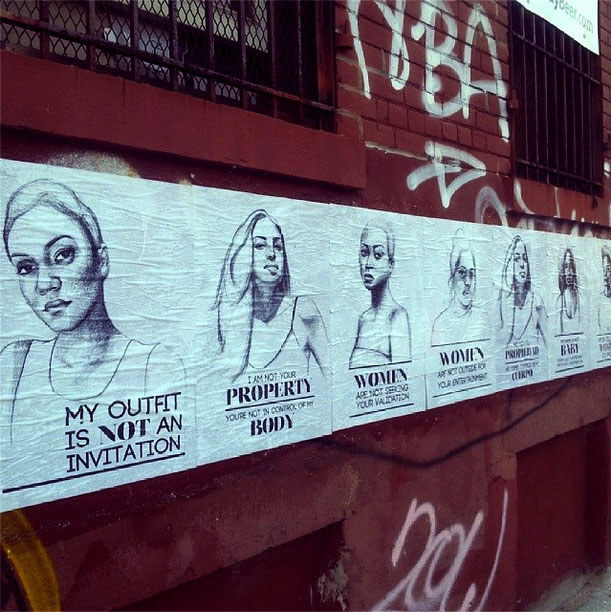 In 2012, Tatyana Fazlalizadeh started her campaign Stop Telling Women to Smile in hopes of addressing gender based street harassment, and to create a safe street environment for women through social impact.

For many women, just walking down the street can mean being subject to harassment by men; from subtle comments to overtly hostile remarks. Fed up with such treatment, Tatyana decided to speak out. Her response was an illustrated of her self with a caption “Stop Telling Women To Smile” and plastered copies all around her Brooklyn neighbourhood.

Since then, Fshe has created more posters with each piece featuring a different woman, and a caption that reflects their own experiences with public harassment.

With $35,000 raised on Kickstarter, Tatyana Fazlalizadeh has now taken her project on the road to Chicago, Boston and the West Coast.

The project consists of a series of portraits of women – women who I have sat talked with about their experiences with harassment. The portraits are designed into posters, including text that is inspired by the subject’s experiences.

Stop Telling Women to Smile is an art series by Tatyana Fazlalizadeh. The work attempts to address gender based street harassment by placing drawn portraits of women, composed with captions that speak directly to offenders, outside in public spaces.

Tatyan Falalizadeh is an illustrator/painter based in Brooklyn, mostly known for her oil paintings. Having recently branched out into public art as a muralist, STWTS was born out of the idea that street art can be an impactful tool for tackling street harassment.

STWTS started in Brooklyn in the fall of 2012. It is an on-going, travelling series and will gradually include many cities and many women participants.

Street harassment is a serious issue that affects women world wide. This project takes women’s voices, and faces, and puts them in the street – creating a bold presence for women in an environment where they are so often made to feel uncomfortable and unsafe.