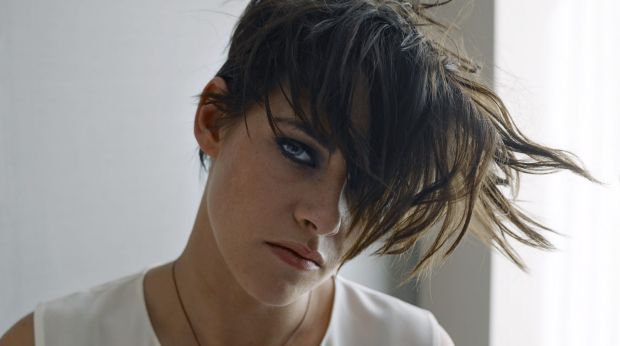 Last week the Kristen Stewart took a bold step in revealing in the new issue of Elle U.K. that she’s in love with a woman.

Right now I’m just really in love with my girlfriend. We’ve broken up a couple of times and gotten back together, and this time I was like, ‘Finally, I can feel again.’ “

In doing so she told the world she was not closeted, and she was not ashamed to be in a relationship with a woman.

I was like, ‘Actually, to hide this provides the implication that I’m not down with it or I’m ashamed of it, so I had to alter how I approached being in public,” Stewart said.

I know what many of you are thinking. You’re not surprised and knew Stewart and Alicia Cargile were in a relationship for quite some time now.

You’ve seen the photos of the couple holding hands. You’ve read the tabloid reports about their ups and downs.

But the big difference now is that Stewart herself has gone on record and confirmed the romance.

And by opening up about her girlfriend, she has helped many of her young fans struggling with their sexuality to see that being gay or bisexual is okay.

Yes, some of us are lucky enough to live in a time when the LGBT community is slowly being accepted, but as we all know more still needs to be done.

Coming out is still very important for us to be free and to eventually have equal protection under the law.

Harvey Milk, the first openly LGBT person to be elected to office as a city supervisor in San Francisco, understood this well when he said,

Before the gay rights movement, it was easy to believe for many that we hardly existed.

We were only a pariah of society, labelled as perverts to be harassed by police and arrested, simply for being in a bar frequented by our own kind.

Then came a night at the Stonewall Inn in Greenwich Village when a group of gays decided they were fed up with being harassed and corralled into patty wagons and taken to jail, just because they frequented a known gay bar.

It was time to fight back and it was time to let the world know that we did exist and we had a right to exist.

Nowadays, every time a celebrity comes out, there are those who find it offensive and they do not mind voicing their disgust in blogs and in comments.

Some just simply cannot understand why we feel the need to let everyone know we’re gay, because it is just not important anymore, to them.

I beg to differ. It is very important that gay people, especially celebrities, to let the world know they are gay or bisexual because it is those who stand up to be counted as one of us, yet another gay person, that pushes our fight for equal rights forward.

If it were not for those willing to stand up, we all would be back in the closet, living in fear, afraid to lose our jobs, our freedom, even our lives.

Perhaps the day will come when it will no longer be important that someone like Kristen Stewart to come out and let the world know she is queer.

However, as long there are people in this world that cannot live free and equal the same as heterosexuals do, then it will be of the utmost importance that every queer person who is willing and who can, to stand up and be counted.