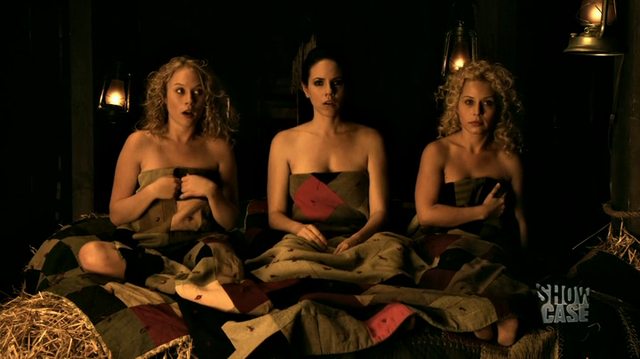 In these scenarios, I like to think that there are three basic “roles” that a person can play. These roles are the same, regardless of the sexualities of the parties involved:

At various points in my life, I have played each role at least once. Would I do it again? Maybe – if everything was just right. But it’s not something I specifically want now. It’s been good and it’s been bad, and sometimes it’s been downright horrible.

That being said, there are a few ways that you can help make the experience better – for everyone involved. Again, every situation will be different, and it’s important that you thoroughly talk about the situation with your partner before you move forward with the plans. It’s best if you have the chance to speak with your Third about the expectations, as well, but sometimes it’s best not to. (I’ll explain in a little while.)

Once you’ve established which part of the equation you play, read the tips below to keep most problems away. Note that while we will refer to all three roles as female, the process will be roughly the same no matter which gender each role identifies as.

For the First Person

First, let me say: If you are considering allowing your partner to bring someone into your relationship (and your bedroom), you must make sure you are aware of the risks. While you can try to prevent any problems from happening, there are no guarantees. It’s important that you evaluate your own situation to make sure that your needs are met.

Sometimes, it’s hard to wrap your head around why your partner would want to sleep with someone else – especially if you’ve never been the Middle before. If you have questions, you should ask – but be fair to her. We can’t always control the things that turn us on, nor do we all have the same reasons for wanting to look outside of our relationship for sexual attention. Hear her out, and decide if it’s something you can handle or not.

If this wasn’t your idea, you will have to think about why you’re on board. Legitimately, if you can’t think of a reason, you should not go through with it – these situations have a tendency to go bad, fast, if someone is not fully on board. This is a huge risk as far as your relationship is concerned, and if you aren’t confident in your decision to pursue it, your insecurities will be much more noticeable throughout the process. Also, keep in mind that just because it wasn’t your idea doesn’t mean you are safe from falling for the other person – our attraction is often out of our control and there’s no way to fully prevent attachment.

Don’t make it all about what your partner wants – you have the right (and the responsibility) to let her know what you won’t allow. If, for example, you are absolutely not OK with them kissing on the mouth, you should let her know before it comes up. Encourage your partner to share her personal boundaries, as well – it can help you keep your insecurities in check if you have a clear idea of what is and isn’t “allowed”. (But remember that sometimes, in the heat of the moment, the rules might get broken – you’ll have to decide what to do about this if it happens.)

For the Middle Person

It can take a huge amount of courage to tell your partner that you want to have sex with someone else. Hopefully, if you’ve already brought it up to your partner, you did it gracefully, and reassured her that it doesn’t mean you’re unsatisfied with her. As much courage as it takes to bring it up, it takes just as much courage to agree to it – remember that.

1. Give her a chance to think about it.

If you haven’t asked yet, make sure you don’t spring the idea on her once you’ve already got it lined up. This is a decision that the two of you will need to make together – it’s generally not a good idea for a surprise unless you’ve explicitly discussed a mutual interest in it. (And even then, there’s risks involved with surprising her with it.)

2. Pick someone together – not by yourself.

If possible, you should find someone you both agree to. Of course, this may be someone who appeals to one of you more than the other, but it should still be a mutual decision. Some people prefer to choose someone at random, but I don’t particularly recommend that. There are a few basic things you should know before you get into bed with someone. (See the “all three of you” section for more information.)

If there are things you already know your partner isn’t okay with happening, you should reassure her that you won’t do those things (if you can). Of course, sometimes things happen that we didn’t intend, but you should do your best to respect your partner’s wishes if possible. This is a good time to lay out your own boundaries that you’d like her to respect, too.

For the Third Person

Being the third person is a position of honor – this couple chose you to come into their bedroom, and that’s an exciting idea! But it’s also important that you remember the responsibilities involved with this decision. If not treated with care, your place as the Third can break up an entire relationship, that may have been in place for years. But no pressure – it’s not automatically doomed.

Although there is no way to control who we fall for, it’s important to try to remember that you were into a relationship – and it’s in your best interest to stay on the sidelines, when possible. You don’t want to be the person responsible for breaking up a relationship, if you can avoid it. In some situations, the couple may invite you to become a more permanent part of the relationship – but this is a decision for them to bring up, not you.

2. Set your own boundaries.

If there are certain things you personally don’t think you could handle without getting attached, it’s important that you let this be known. Just because you’re the outsider here doesn’t mean that your needs are any less important than the couple’s. There’s nothing that says you even have to use your real name – but please don’t lie about your sexual health!

As long as their requests don’t put you out of your comfort zone, it’s pretty important that you follow along with what they want. After all, they’re risking their relationship, and most likely they will have already talked things through to decide what they are and are not OK with. If they tell you something’s a hard no, don’t try and push it.

For All Three of You

Now that the three of you have started to get to know each other, there are a few steps that you should all think about. Not all of these things need a direct action, but you should at least have them in mind when you’re making your plans.

1. Decide how much you want to know each other.

While you might not want to get too deeply connected to each other, you should decide how much you want to know about each other – and make sure you know it. In many cases, this can be as simple as name, sexual health history, and a few brief turn-ons, just so you know what direction you’ll go in. Getting to know each other too well may increase the risks of someone getting attached.

2. Decide how you will stay safe.

If discretion is a concern of yours, it may be helpful to meet at a neutral site (such as a hotel room) to keep some distance. If you are meeting someone from the internet, it can be especially beneficial for everyone if you meet somewhere else.

Whenever having sex with a new partner, it’s best if everyone involved is tested for sexually transmitted diseases. While this doesn’t seem like a very glamorous part of the process, it’s incredibly important. Most people do not practice safer sex every time, and STDs can often be present without any symptoms. It’s important to know your own sexual health and history even if you aren’t currently sleeping with someone.

Will you all be deleting each other’s phone numbers (and contact history) after your tryst? This is something you should know going in. In many cases, it can be reassuring to stop all contact after the deed is done, but not everyone feels this way. You should plan together before anyone takes any clothing off. This is important!

Safer sex is everyone’s responsibility, and all three of you should assume that the others are not going to think about it. It’s much better to be over-prepared than under-prepared. After all, it’s possible that you’ll have more sex than you anticipated, and extra protection is never a bad idea! This should be an important step of the process even if there is no risk of pregnancy, and even if all three parties tested STD free.

6. You are allowed to change your mind.