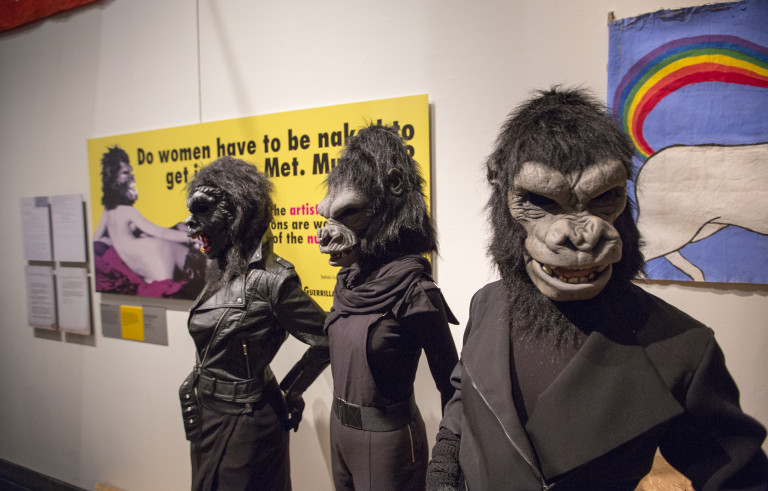 On Thursday 9 of March I had the opportunity to attend a “gig” of Guerrilla Girls in my hometown, Athens – a presentation of their work in the form of performance that was followed by questions and discussion with the public. It was a really cool event that led to a fascinating discussion with the two Guerrillas who were present, very receptive to questions, concerns and suggestions.

Guerrilla Girls are feminist activists and artists. They always wear gorilla masks in pubic so that no one focuses on who they are so that people can pay attention on what they do instead.

Our anonymity keeps the focus on the issues, and away from who we might be. We could be anyone and we are everywhere.”

Instead of their real identities they use nicknames taken from important women written down in history of art, such as Frida Kahlo, Käthe Kollwitz, and Zubeida Agha. There have been around 60 members in Guerrilla Girls over the years.

They have been around since 1985 when they decided to speak up against the male-dominated art world in New York City, with their main point of reference being a huge MoMA exhibition where women and POC artists were vastly underrepresented – 152 male artists and only 13 women.

Since then they have been shaking the waters of the mainstream world of art, cinema, and popular culture with facts, humour and graphic/visual art that aims to raise awareness and protest against the discrimination and inequality that women face in those areas.

Their motto is “Reinventing the ‘F’ word: Feminism” and they believe in intersectional feminism “and human rights for all people and all genders”.

They also wish to push against mainstream class hierarchies in the world of art, including rich collectors and museum owners who shape and dictate who has the power, who is promoted and whose art matters only based on profit. To do that they ridicule, they protest and complain, using cheap, alternative ways of being heard, such as stickers, leaflets, posters, videos, and street actions.

They told the Guardian:

Whenever you read about artists, a lot of the coverage has to do with how rich they are, how much their work sells for, which wealthy people in the world have them. No one is looking at the system and saying: is this the way culture is produced?”

Gradually they developed, ending up writing and publishing books, doing exhibitions all over the world (including Bilbao, Madrid, Iceland, Istanbul, London, Los Angeles, Mexico City, New York, Sao Paolo, Rotterdam and Shangai), and even being exhibited themselves in the very museums that they’ve called out at times.

Some of their most well-known projects include the ironic “Advantages to Being a Women artist” poster they made in 1988, their 1989 poster of Ingres’ painting “La Grande Odalisque” with a gorilla head placed over the face of the nude figure, with the slogan “Do women have to be naked to get into the Met. Museum?”, their poster criticizing the Academy Awards with an “anatomically correct” white male Oscar statue design, and many more.

In their gig in Athens they also spoke up for intersectional feminism, POC rights, LGBTQ+ rights, for the lives of Trans people and against the plutocracy in art. Appearing in Stegi of Letters and Arts was their second event in Athens, ten years after visiting Art Athina for Zubeida. Before the event they said:

In fact, this is for us an investigation trip. We want to see how the art community dealt with the crisis, how they adjusted to it.” And they did.

After their presentation, they exchanged experiences and opinions with Greek-based artists who suffer in several ways from discrimination both in the academia and the industry.

They advised the audience to fight back and raise their voices with ways as simple as is putting stickers up on walls and then run away quickly – that can be applied to raise awareness against discrimination in the worlds of music, theatre, fashion, philosophy, and other ideas that were heard from the audience.

Their most inspiring piece of advice was that, “once you get someone to laugh you got a hook on their brains”. I can’t remember the exact phrasing, but the point is that you always got to aim to get someone, even when they disagree with you, to start having second thoughts about an issue. To bug their heads, make them start considering that things maybe aren’t as simple as they seem. And their advice when it comes to the how? Provoke, complain, use your sense of humour, ridicule, step on names who do the wrong thing, say their names out loud, complain some more.

When it comes to the mainstream-ing of feminism, or its turning into a trend, they said in an interview at Greek online magazine Lifo: “It’s ok! Let’s see how many of them are really feminists. We won’t judge anyone who says they support feminism though. There is no acceptance test, only actions.”

You can find the livestreaming of their gig in Stegi of Letters and Arts, Athens, here.

Guerrilla Girls have also protested against the domination of white men in the film industry with their 2003 “Even the Senate is More Progressive than Hollywood” billboard, their stickers at the 2001 Sundance Film Festival, their “Birth of Feminism” 2001 project for The Nation and others. In addition, they have actively and explicitly protested against politicians, mostly Republicans. Their ridicule and criticism of Trump was apparent throughout their entire presentation in Athens, refusing to call him by his name and calling him “45” instead.

They have given multiple “gigs” and presentations like the one in Athens, in universities, art schools, museums, theatres and cultural events all over the world.

Among the audience there were many women who thanked them for being an inspiration throughout the years, encouraging her to keep fighting for her place in the competitive, exclusionary, and discriminatory world of art.