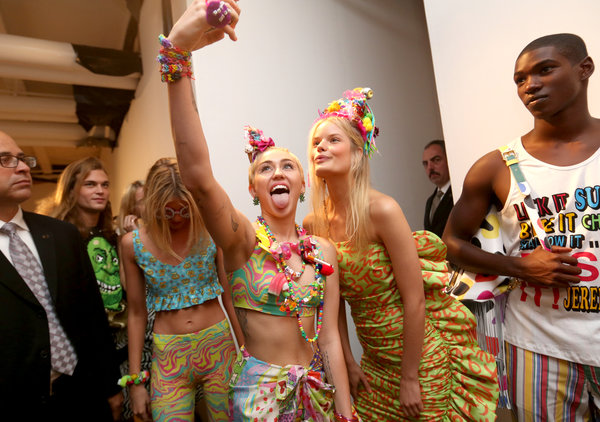 Miley Cyrus is one of 3 high profile celebrity designers to feature at this years Fashion Week.

Cyrus debuted her funky jewellery, made of children’s alphabet beads, little toys and lots of other colourful stuff, at designer Jeremy Scott’s show Wednesday. The atmosphere was suitably frenetic – even more so than usual at the bad-boy designer’s shows. Beforehand, photographers swarmed Cyrus, dressed in a bright multi-coloured ensemble of trousers and bra top, along with some of her handmade jewellery.

And after the runway show, in which many outfits included Cyrus’ creations, Scott came out for a bow, scooped the pop singer up from her front-row seat, and brought her along for a victory lap.

“We live really close to each other in LA, and she had a little party and I came over. And she started showing me these things she was making, and I said `Wow, this kind of looks like my collection – it’s colorful and stream-of-consciousness and everything just kind of goes and somehow works. I was like, `Oh my god this looks so cool, would you think about doing something?'”

Next on the list is Nicki Minaj, who has recently dropped her colourful and oddball style for a more natural and sophisticated look, says it’s because she’s more comfortable in her skin.

Minaj’s new look includes her natural black hair colour versus the wild and bright wigs she’s worn that helped establish her name in pop culture. At the Fashion Rocks concert Tuesday in Brooklyn, New York, where the rapper performed, she wore a blazer and skirt that came off like a little black dress.

Then we have family man David Beckham. The Beckham family has made a name in fashion with Victoria Beckham’s high-end collection, which showed Sunday at New York Fashion Week, and sons Romeo, 12, and Brooklyn, 15, gracing magazine covers and Burberry ads.

Now the former soccer star has his another fashion collaboration with British brand Belstaff. Beckham said he lent much more than his name to the six-piece capsule collection that includes leather motorcycle jackets ($1,950), a pair of distressed jeans ($395) and a classic, white T-shirt ($95).

“I have always been involved 110 percent. People know that it’s what I would wear and that’s why people have loved the collection the way they have.”