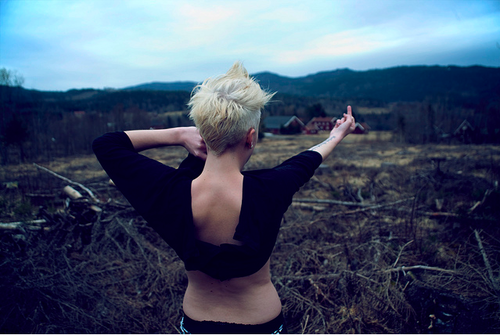 OK. I have a problem and hope people here won’t judge me because I feel terrible about this situation. I have a girlfriend of 2 years who I absolutely adore. I came out rather late (when I was 24) but she has been out since she was a teenager.

Both of us identify as gay and have no interest in men. However, I have always been attracted solely to butch women – or at least women who had a masculine, or at least androgynous appearance.

My girlfriend fits this to a T – short hair, jeans and T-shirt, tall and muscular figure, plays softball, etc. In contrast, I have always been on the more feminine side of the spectrum.

Anyway, last month we went together to a wedding of a family friend. To my surprise, when we were getting ready, she comes out of the bathroom wearing a dress. I have literally NEVER seen her wear a dress, and in fact, in the past she has always told me that she felt uncomfortable wearing women’s clothing. She looked pretty nervous, and asked if I liked it. I told her that I did … but in reality, I was weirded out, but I didn’t want to hurt her feelings.

We went to the wedding and when we came home, she pulled me into the bedroom. And this sounds SO terrible to say but while she was kissing me, all I could think about was how we were both wearing dresses and heels and how I felt like I was kissing my mother, or my aunt, or my best (platonic) female friend. Something about it felt wrong.

It’s been a month since this happened, and (without any further explanation), she has started wearing dresses/skirts on a regular basis and has even started growing her hair long. And I haven’t said anything, but my feelings haven’t changed. It feels weird to me, and it’s hard for me to feel attracted to her even though I still love her as a person.

What is the reason for this?? I feel like a terrible human being. On one hand, I know love is about more than what someone looks like. My girlfriend hasn’t changed at all on the inside, so I should love her regardless of what clothes she’s wearing. But on the other hand, how many straight women would lose all attraction to their boyfriends/husbands if they suddenly started wearing women’s clothes? (Lol.) And also, is my attraction to butch women some sort of manifestation of a hidden homophobia or something? I don’t know what to do or why I’m feeling like this.

A: First let me start with your first paragraph – anyone who is willing to judge you isn’t worth your time. This is a free space, and your opinions are valuable. No one is here to judge you.

Second, you are allowed to have your preferences. In this day and age, as people begin to become more accepting (especially as it pertains to the gay community) the unfortunate side effect is that people feel entitled to be offended by things that have nothing to do with them. In this situation, who you are attracted to is out of your control. If you’re more attracted to butch women, it is your right to have that preference.

Just as someone who prefers to date tall women or short women exclusively – we all have a type, and some are more specific than others. No one can tell you that “your type” is wrong.

Beyond that, however, you need to evaluate how important this new part of her personality is to you. My girlfriend, for example, is strictly butch – but I’m not typically attracted to women who have a strong leaning one way or the other.

In my relationship, I have decided that it’s less important than other factors (although I do often request that she wear something girly, just for me – without having to go out in public in it) but the fact of the matter is that only you can decide if that is true for your relationship. No one can force you to be attracted to something you’re not attracted to.

If you can’t handle the idea her of presenting femininely, your next option should be to see how firm she is about this new style. In some cases, when women change their style, it may simply be because they’re trying to accommodate an assumption they have about their girlfriend. If this is the case, most likely you’ll just have to tell her that no, you’re not into it, and she’ll go back to her old self.

If she does want to express herself in more feminine clothing, my advice is that you see if you can negotiate. For example, “If you’re going out with your friends, I don’t mind how you’re dressing, but if we are going to go on a date would you mind dressing in your old clothes?” It won’t always work, but if you care deeply about each other, you should be willing to compromise.

If she’s not willing to budge, and you’re not willing to budge, you may be best served by some time apart. (This is actually what made me realize I was willing to accept my girlfriend’s masculinity – we broke up for a while, and I realized I missed her more than I cared about how she dressed.) It’s possible that you’ve simply grown in different directions. This is an unfortunate part of the process of growing up in general, and there’s not really a way to address that issue alone.